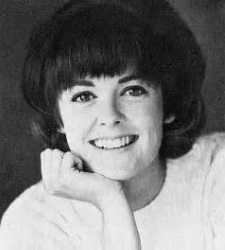 Susan Browning was born in Baldwin, which is in Hempstead, which is on Long Island, which is part of New York state, in the U. S. of A. I could not find any other information on her early life, so fast forward to her late teens: she attended Penn State University (so she was smart) and became a member of Kappa Alpha Theta sorority (so she was popular).

Browning was cast in her first Broadway role in 1963, landing a part in the musical comedy Love and Kisses (yeah, no one else ever heard of it, either). After that experience, she was cast in quite a few television guest spots, including The Wild, Wild West; The Girl From U.N.C.L.E.; and The Monkees. (As of June 2017, The Monkees episode, at least, could be found on Youtube).

April 1970 saw Browning back on Broadway in a big way—she started a 20-month run as April in the George Furth/Stephen Sondheim blockbuster musical “Company.” For her performance, she won a Theatre World Award and received a Tony Award nomination for Best Actress in a Musical. (She received an impressive second Tony nod for Best Featured Actress in a Musical for “Goodtime Charley” in 1975)

Browning continued to appear on Broadway and on the big and small screens throughout the 1970’s, 1980’s, and early 1990’s. She had a recurring role on the television series Mary Hartman, Mary Hartman in the late ‘70’s, and she was also in the movies The World According to Garp, The Money Pit, Sister Act (as a singing nun, but not the singing nun), and Sister Act II. Her last acting credit was in the 1995 remake of the movie Sabrina.

Browning died on April 23, 2006, after a brief illness. According to Playbill, Browning’s sister told friends she had been on life support for several weeks after falling ill.

Where is she today? Unfortunately, I have no idea.