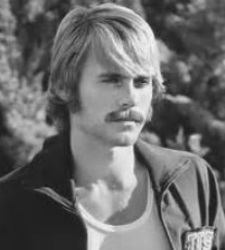 Main claim to fame: being able to outrun just about everyone else pn the planet

Steve Roland Prefontaine (“Pre” to his friends and fans) was born on January 25, 1951, in Coos Bay, Oregon. He was said to have been an active child (meant in a good way, not as code for “annoying”). In junior high school, he tried his hand at football and basketball, but his slight stature meant that his usual position was bench warmer. Then he discovered his talent for middle- and long-distance running. Back in those days, running wasn’t considered a legitimate pastime by the masses. About the only times non-athletes ran were if they were late for a bus or fleeing the scene of a bank heist. Prefontaine was a big part of the reason why running for fun and/or routine fitness is so commonplace today.

Pre competed on his school’s track team for all four years he was in high school, starting out good and ending up great, finishing both his junior and senior years undefeated in 1- and 2- mile competitions.

Heavily recruited by colleges across the U. S., Prefontaine chose to attend the University of Oregon, swayed by head coach Bill Bowerman’s promise to make him the best long-distance runner ever [at that time, which he did]. Bowerman was also instrumental in the founding of Blue Ribbon Sports, which later became known as Nike. You might have heard of it.

Prefontaine developed a large fan base for a college runner, and the numbers increased after he graced the covers of Track and Field in November of 1969 and Sports Illustrated in June of 1970. He finished college with seven NCAA National Championship wins, a gold medal from the 1971 Pan American games, a 4th-place finish in the 1972 Olympics, and, of course, the ability to run an under-4 minute mile.

After graduation, Pre chose to maintain his amateur status in order to be eligible to compete in the Olympics. The only problem was that as an amateur, he was not allowed to be paid for attending any racing events or making personal appearances, or accept any free sports-related merchandise (such as Nike shoes). At that time, amateur athletes either needed to come from families that were willing and able to support them, have a lot of generous friends, or work side jobs and live in crummy places. Pre fell into the last category. While not running, running, running, he picked up the occasional bartending gig, and worked part-time selling athletic shoes for… you guessed it. Pre made no secret of the fact that he thought it was unfair that many amateur athletes were forced to live near, at, or below the poverty line while they were training, especially considering the fact that they were training in order to represent schools or countries that were making huge amounts of money off them by hosting the sporting events in which the athletes participated. He was a frequent and loud critic of the Amateur Athletic Union (AAU) the agency in charge of governing situation.

Just a few short years later, things did change for the better for amateur athletes. Unfortunately, Pre didn’t live to see it happen. On May 29, 1975, he participated in a track meet, running (and winning) the 5,000 meter, and later attended a party. On his way home shortly after midnight, he lost control of his car and hit a rock wall. His MGB convertible flipped, pinning him underneath. According to witness statements, he survived the crash but was crushed by the weight of the vehicle. He died at the scene.

There is some controversy surrounding the details of the crash. Witnesses claim there was another car on the road that night. One witness in particular, a 16-year-old boy who happened to be looking out onto the street from his second-floor bedroom window, had very clear memories of the crash and said the other car was too close to Prefontaine’s, forcing Pre to make the evasive maneuvers that ultimately led to the crash. The police tracked down a 20-year-old man who admitted to having been there, but claimed he found Prefontaine after the crash and sped home to get his father, a doctor. There was never any mention that the father and/or son ever showed up at the accident scene when other rescuers were there, so that explanation sounds a bit suspect. Also, the father had a reputation of being a drinker, so some people speculated that the father had been the one driving the second car, and he had his son cover for him. (If so, great parenting.) The official police conclusion, however, was that it was a one-car accident and that Prefontaine was intoxicated (his blood alcohol test results came back as 0.16—well above the legal driving limit at the time—but some people had concerns that correct testing protocols were not followed). Additionally, on his journey he had ferried a passenger, famed runner Frank Shorter, from the party to a mutual friend’s house, and had dropped him off just minutes earlier. Shorter stated that Prefontaine may have had been drinking some at the party, but was not intoxicated or having any difficulty driving. The blood sample has reportedly disappeared, ending any possibility of retesting.

At the time of his death, Prefontaine held each and every American distance running record from 2,000 to 10,000 meters. The final record he held, the Olympic trials 5,000 meters, was not broken until 2012.