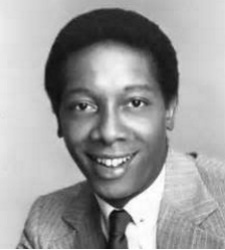 Nathan Earl Cook was west Philadelphia born and raised, but he obviously didn’t spend too many days hanging out on the playground with the Fresh Prince—Cook did well enough in school to be accepted to Penn State. After his college graduation, Cook spent a few years acting in a repertory company in Louisville, Kentucky, where he worked with such performers as Victor Jory, Jeffrey Tambor, G. W. Bailey, and Sandy McCallum, Sometime in 1974/1975, he moved to Los Angeles and landed a few small movie and television roles.

In 1978, 28-year-old Cook got his moderate break when he was cast as high school athlete Milton Reese in the television show The White Shadow. That job lasted for a couple of years and was followed by a fair number of gigs, including a recurring role on Hill Street Blues. In 1983, he was cast as Billy Griffin in the weekly hour-long glitz-fest Hotel.

Side note: I never saw Hotel when it aired, but recently I watched the one episode I found online just to see what it was like. Cook was on screen for less than a minute and had exactly two lines (for a total of six words, one of which was “um”).
So he didn’t have the biggest part in the show, but at least it left him with plenty of free time to make dozens of celebrity guest appearances on various game shows. Some of the shows were long-running classics and some were kind of crappy flashes-in-the-pan, but Cook was terrific in every one of them. He was a stellar $25,000/$100,000 Pyramid player.

Cook remained on Hotel for its entire 5-season run. (During the show’s run, he and his wife, Cara, had two children, one in 1984 and one in 1986.) The last show aired on May 5, 1988. Less than six weeks later, in the very early hours of June 11, 1988, Nathan Cook was rushed to the hospital because he was having trouble breathing. He died at around 3 a. m. His cause of death was eventually determined to be an allergic reaction to penicillin.

These days, Cook’s visitors can find him at Rolling Green Memorial Park in Camp Hill, Pennsylvania, a bucolic-sounding place if I ever heard one.