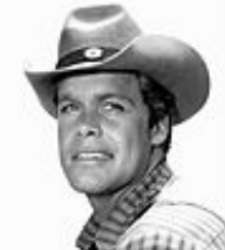 Douglas Osborne McClure was born in Glendale, California on May 11, 1935. Not much is reported about him besides the fact that he was a very private person, and his acting credits, of which there are many. His first screen role was portraying a soldier—a tiny, uncredited part in Friendly Persuasion, a 1956 movie starring Gary Cooper, Dorothy McGuire, and 100 other actors. McClure went on to play other military men, as well as doctors, gamblers, law enforcement officials, cowboys—the list goes on and on. This guy was one well-liked and oft-hired actor. The role he is probably best known for—and his longest-lasting one to boot—was that of the one-named bad boy turned good guy Trampas (where did they get that name from?) on the television western The Virginian, a role he stayed in for the show’s entire nine-year run.

You youngsters out there are probably most aware of him because of The Simpsons’ character Troy McClure, a shout-out by Simpsons producers to McClure and another 1960’s heartthrob, Troy Donahue. According to one source (cough*Wiki*cough), McClure used to watch The Simpsons. When he first saw the character, he asked one of his daughters, “Are they making fun of me?” He must have been o.k. with her answer, because he purportedly enjoyed seeing Troy McClure on the show.

McClure was apparently an incurable romantic, because he married five times. He had two daughters, one of whom also tried her hand at acting and had a small part in a Virginian episode. There’s a sweet scene where the two of them are acting together. (She also played Elle’s mom in Legally Blonde and LB II.)

Around 1993, McClure was diagnosed with lung cancer, but powered on working while he fought the disease. He lost his battle on February 5, 1995, at the age of 59. Several of his final television appearances aired after his death. (He made his last public appearance in 1994 when received a star on the Hollywood Walk of Fame, so at least he got to experience that.)

McClure’s final resting place is Woodlawn Memorial Cemetery in Santa Monica, California—about 30 minutes away from the place where he started.